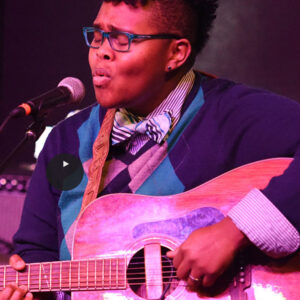 Ask about the new generation of social justice music-makers and Crys Matthews will be mentioned. A prolific lyricist, Matthews blends Americana, folk, jazz, blues, bluegrass and funk into a bold, complex performance steeped in traditional melodies punctuated by honest, original lyrics. “While each and every day, on each and every media platform, we’re reminded of the division, alienation, marginalization, and divisiveness rampant in our country (and our world), we’re not often enough met with people like Matthews,” said Justin Hiltner of Bluegrass Situation, “who exist as reminders of what beauty can occur when we bridge those divides.” Her two 2017 releases, a full-length album called The Imagineers, a selection of thoughtful songs about love and life, and an EP called Battle Hymn for an Army of Lovers, which tackles social justice themes, helped earn Matthews high praise like that from Hiltner as well as the title of 2017 NewSong Music and Performance Competition grand prize winner. Matthews also won the People’s Music Network’s Social Justice Songs contest at the 2017 Northeast Regional Folk Alliance.

A southeastern North Carolina native who now calls Washington, DC home, Matthews has been compared to everyone from Toshi Reagon to Tracy Chapman to Ruthie Foster. Equally at home in an acoustic listening room as she is on stage at large music festivals, Matthews has quickly gathered a loyal following on the east coast playing such prestigious venues as the Sundance Film Festival, The Birchmere, The Hamilton, and Jammin’ Java. Matthews’ festival and showcase roster has included BMI’s Island Hopper Songwriter Festival, the 40th Michigan Womyn’s Music Festival, Folk Alliance International, 30A Songwriters Festival, Northeast Regional Folk Alliance and many more.

Thoughtful, realistic and emotional, Matthews’ songs speak to the voice of our generation and remind us why music indeed soothes the soul.