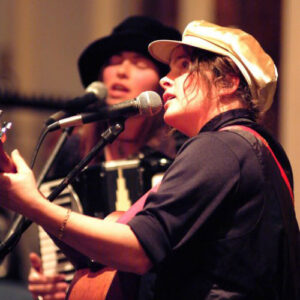 Troubadours of Divine Bliss, Renee Ananda and Aim Me Smiley, play heartfelt, eclectic folk featuring harmonies “smooth as Kentucky Bourbon”, guitar, ebow and accordion. They have been best friends since their teens when they met at a holy-rollin’ church outside of Louisville, KY. Despite Aim Me’s dad kicking Renee’s dad- the pastor- out of the church, the girls remained friends and over a decade later, fell in love. They dreamed of traveling the world making music together-singing songs about following your heart, freeing your dreams, and finding your bliss. That’s when they moved to New Orleans and became street performers calling themselves Troubadours of Divine Bliss.

Since then, they have spent over two decades touring full time all over America, Canada, Scandinavia, and Europe. Their style has broken the shackles of genre and their nine recordings attest to that. The Troubadours’ music is remarkable for their harmonies, unique diversity and uplifting message.

Renee Ananda and Aim Me Smiley are musicians, ministers, activists, writers, life coaches, retreat leaders, homesteaders, and founders of Mighty Kindness www.mightykindness.org- a community unity organization. They live in southern Indiana in the Hoosier National Forest leading retreats and events at their Nature Sanctuary, Way of the Heart Woods, www.wayoftheheartwoods.org, and touring internationally sharing their songs of love.