There is much opportunity to embrace at the intersection of comedy and hip hop. Just ask Omega Jade — creator, host, and producer of Rhyme & Unreason, which can be described as “a chaotic mashup of standup comedy and freestyle rap.”

But embracing this opportunity did not come easily. Born in Arizona and raised in San Diego, as Seven Days reports, Omega Jade found herself at a turning point after suffering a nervous breakdown after fighting back against an abusive man. But with the support of a therapist, Jade realized the importance of finding a new, sustainable outlet for her emotions and past experiences.

That’s why Jade released her debut album, Wounded Healer, while also producing her show Rhyme & Unreason. Wounded Healer is a powerful testament to her recovery from abuse: a personal journey and testimony. It also led to an opportunity for Jade to go on tour with American rapper and producer, Pace Won. 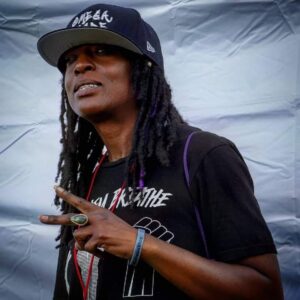 On the importance of her music, Jade says, “I seek to convey my message to women who have been in a situation they see no way out of. As a survivor of domestic violence, I have used poetry and music as a way to heal and thrive. It has helped bring so many opportunities. I have talked to a lot of women who have either gone through it or work with women who are victims themselves. For the survivor, my music says there is life after leaving a toxic situation. If you keep at it, who knows what can be accomplished.”

Now, Omega is amplifying her reach through work as a teaching artist at the Clemmons Family Farm — one of the only African-American-owned farms in the state of Vermont. Recently, she was a featured artist at their Alone Together With Words That Heal, an interactive community-building arts and culture program.

In fact, community-building has become a new vehicle through which Omega finds catharsis at the intersection of comedy and hip hop. “I believe it’s important as a pillar of this community to stay active in it. I bring my own experiences as an independent artist. I bring knowledge of how to make music and have it copyright protected. I can offer my time as a mentor for an aspiring artist of the next generation,” she says.

As a panelist at the upcoming Artist Changemaker Workshop on November 13 and 14, Omega shares her thoughts on the impact of holding such an event.

“I think this will help with networking and collaborations among various artists of different mediums. Maybe it could be the beginning of an annual artist panel. It could also help establish an artist union, if that is even possible.”